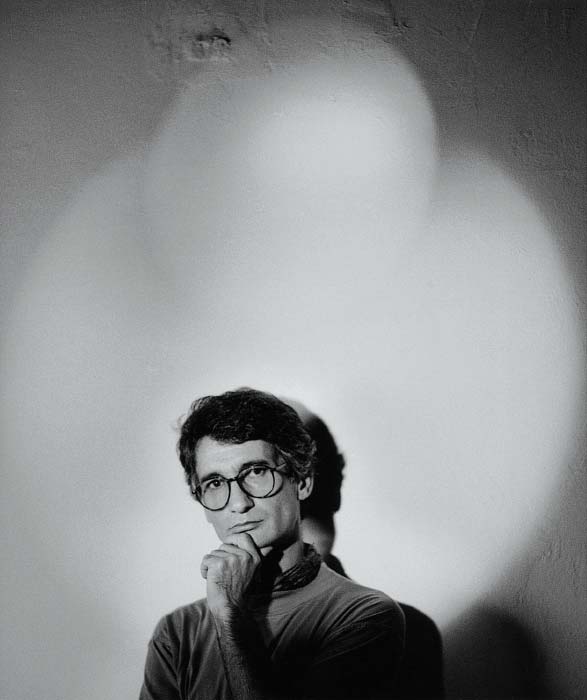 “As someone who played an important role in the destruction of patterns based on depiction in the context of photographic opportunism in Turkey in the ’80s, and who contributed to and accelerated the creation of theoretical and practical infrastructure of the period; instead of photographing the moment within the objective reality we live, by watching and combining the images of things issuing from the imagination, from a dream or a subconscious impulse over time, as a fluid way of facing the other reality, just like in the theatre, I create my own subjective reality, which is then reflected, in my work.

As Man Ray says, I just try to be as free as possible in the process of the formation of photographic manifestations. In the course of my work, nobody can rule or guide me. They can criticize me upon the completion of the work. But then it is too late; work is done and freedom is ingested to the last drop. This is a painful task; but this feeling is worth experiencing.”

In 1970, he graduated from Istanbul State Academy of Fine Arts (IDGSA) Textile Department. In 1972, he attended Kunst Hochschule Kassel (Germany / Ehem Gesamthochschule Kassel), for which he received a State scholarship,  where he completed his experimental photography and graphic design specialization training in 1977. In 1975, he participated in seminar studies organized by Europhot in Chalon-sur-Saône (France) and in 1981, photograph seminars and workshops at Salzburg Summer Academy, attending at the invitation of the Austrian Federal Ministry of Science and Research.

In 1974, he held his first solo exhibition OBJELER / OBJECTS in Kassel. This was followed by the exhibition GERÇEK VE FANTEZİ / TRUTH AND FANTASY at IDGSA in 1980, and the exhibition DENEYSEL FOTOGRAFİ / EXPERIMENTAL PHOTOGRAPHY in Germany (Osnabrück), the exhibition KAVRAMSAL VE GÖRSEL İMGELER-1 / CONCEPTUAL AND VISUAL IMAGES-1 at the 2nd Art Biennial in Istanbul in 1989 and KAVRAMSAL VE GÖRSEL İMGELER-2 / CONCEPTUAL AND VISUAL IMAGES-2 in Ankara in 1990, 11 GALERİ 11 SERGİ / 11 GALLERIES EXHIBITIONS at Marmara University Faculty of Fine Arts in 2004 and ÖTEKİ YÜZ / THE OTHER FACE within the scope of Fotoistanbul International Festival of Photography in 2016. Between 1989 and 1998 he organized the DENEYSEL FOTOGRAFİ ÖĞRENCİ ÇALIŞMALARI-1, -2, -3 / EXPERIMENTAL PHOTOGRAPHY STUDENT STUDIES-1, -2, -3 exhibitions and brought together audiences in the various cities.

He participated in a large number of group and joint exhibitions at national and international levels, including: the Junij’82 international exhibitions in Ljublyana and Belgrade of the GRUPA JUNIJ Artist Group in 1982, the ÖNCÜ TÜRK SANATINDAN BİR KESİT / A CROSS SECTION OF AVANTGARDE TURKISH ART exhibition as part of the 12th Istanbul Festival in 1984, the ART OF TODAY international art exhibition in 1986, the GÜNÜMÜZ SANATÇILARI 12. İSTANBUL SERGİSİ / 12th CONTEMPORARY ARTISTS ISTANBUL EXHIBITION organized by the Istanbul Painting and Sculpture Museums Association in 1991, BİR BİLANÇO: 80’li Yıllarda Türkiye’de Sanat Üretimi / A BALANCE: Art Production in Turkey in the ‘80s, in 2005, DÜNDEN BUGÜNE / FROM PAST TO PRESENT, the Painting and Sculpture Museums Association Contemporary Artists 30th Year exhibition in 2011, DÜNDEN SONRA / AFTER YESTERDAY, The Photography Collection Of Istanbul Modern in 2012, DÜNYA SANAT GÜNÜ / WORLD ART DAY (WAD) exhibition of the International Association of Art (AIAP) in 2012, KIYIDA YAŞAM / Living On The Edge exhibition within the scope of Ege University 5th International EgeArt Art Days in 2013, USTALARIMIZDAN / FROM OUR MASTERS Photograph Exhibition organized by PAFT / Photographic Arts Federation of Turkey in 2015, İNSAN İNSANI ÇEKERMİŞ / Othmar Pferschy’den Günümüze Türkiye Fotoğrafında İnsanın Serüveni – PEOPLE ATTRACT PEOPLE / The Adventure Of Humanity in the Photography Of Turkey From Othmar Pferschy to the Present, in 2016, and the BENİ BUL: Otoportreye Çağdaş Dokunuşlar / FIND ME: Contemporary Takes on the Self-Portrait exhibition, in 2017.

During his tenure as Dean of Faculty of Fine Arts at Mimar Sinan Fine Arts University, he was the editor of the AKADEMİ’YE TANIKLIK, GÜZEL SANATLAR AKADEMİSİ’NE BAKIŞLAR-1 (Resim-Heykel), -2 (Mimarlık), – 3 (Dekoratif Sanatlar) / TESTIMONY TO THE ACADEMY, GLANCES TO THE ACADEMY OF FINE ARTS-1 (Painting-Sculpture), -2 (Architecture), -3 (Decorative Arts), published by Bağlam Publications as three volumes, in 2003.

He has participated in numerous symposiums, seminars, conferences, discourses, panels / open sessions as a speaker between the years 1982-2014; according to data from the Social Sciences Citation Index (SOBIAD) between the years 2005 – 2017, 69 citations have been made to his articles on photography in media publications and his symposium handouts.